Bed Bath & Beyond (BBBY) has been, by far, my best call since I began contributing on Seeking Alpha last year. But the extremely favorable risk/reward then appears to be far more balanced at today’s levels. Yes, 2Q earnings were a blowout, but let’s not forget this is still a retail story facing secular challenges on multiple fronts.

With the stock having significantly re-rated, I fear the market might be pricing in too much optimism in the equity. For the stock to work, the company will need to clear some fairly lofty bars, in my view, and I am simply not prepared to underwrite that risk/reward at this juncture. That said, the company’s liquidity position is a strength, and coupled with EBITDA optionality coming out of COVID-19, I see upside in the longer-dated bonds, which currently trade at a discount and yield ~6-7%.

BBBY’s 2Q may have benefited from industry-wide tailwinds in Home Furnishings, but comparable growth of +6% YoY was well beyond the most optimistic of the bulls (consensus expectations were for an ~2% YoY decline). Overall sales were down 1% YoY, but the impact from the One Kings Lane divestiture likely distorted the figure. Still, sales were well above consensus estimates of -4% YoY, as digital sales rose ~89% YoY, offsetting declines in stores.

Given BBBY had previously disclosed June sales declines of -7% YoY, including the impact of temporary store closures and July sales growth at +2% YoY, that implies August growth was likely running at ~1% YoY, which represents some deceleration but remains positive, in my view. 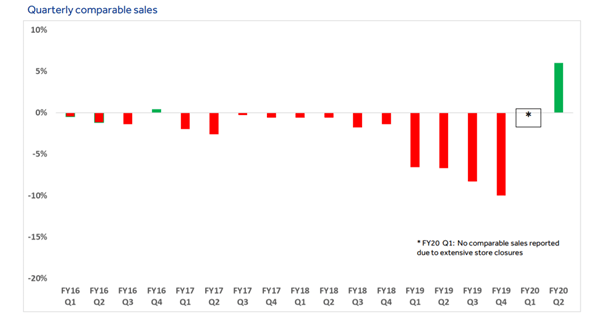 BBBY reported impressive gross margin expansion on an adjusted basis in 2Q (+200bps). The 35.9% margin was a very strong result and came in well ahead of consensus at 30.6% on a more favorable product mix/lower coupon expenses (+150bps), distribution/fulfillment leverage (+190bps), offset by increased shipping costs (-135bps). Given other retailers also cited lower promos during the period, it appears that BBBY is participating in industry-wide tailwinds, allowing it to pull back on promotions for now. As of end-2Q, inventories were also down 12% YoY. But it’s hard to say if the tailwind will last post-COVID-19, and thus, I am reluctant to underwrite a gross margin expansion path into 2H20.

And while the cost out theme is a lot more feasible, in my view, the 1.4% YoY decrease in adj. SG&A dollars were largely down to operating leverage as sales outperformed. As a result, adj. EBIT margins expanded ~210bps to 4.4% (vs. consensus expectations of -0.8%), driving adjusted EPS of $0.50 (+47% YoY).

While BBBY did state that September comps are trending in line with 2Q, this would still imply a deceleration, in-line with the sequential moderation from July to August. Per management, pent-up demand has played a role in recent strength, supporting low-single-digit comps during the quarter and throughout September as well. The implied moderation somewhat validates my suspicion that “underlying” comps (i.e., normalized for COVID-19 tailwinds) are likely trending closer to flat YoY.

I am far more upbeat on the BBBY cost out target, which currently stands at ~$250-350 million in annualized savings (net of $150-200 million in reinvestments). Sources of the savings include store closures ($100 million), improved sourcing ($200 million) and workforce reduction ($100-150 million). With BBBY refraining from providing full-year guidance, it will be interesting to see how the company copes once the industry-wide demand strength normalizes.

Operating improvements in 2Q drove ~$750 million in cash flow, driving a $250 million net cash position and effectively eliminating any solvency and liquidity risks. Even after deducting the ~$245 million in net proceeds from the sale of Personalization Mall, the company still generated ~$505 million organically via free cash flow, as BBBY unlocked ~$365 million from working capital drawdowns (of which ~$185 million came from inventory reductions).

The company used the cash and proceeds from the PersonalizationMall sale to pay down >$450 million of debt, driving a $1.4 billion cash position. Net of a $1.1 billion debt load, BBBY ends up with a $250 million net cash position. More impressively, if we were to also account for the $700 million availability from the revised ABL facility, that leaves BBBY with ~$2.2 billion in available liquidity. That makes the company very well-capitalized, in my view. 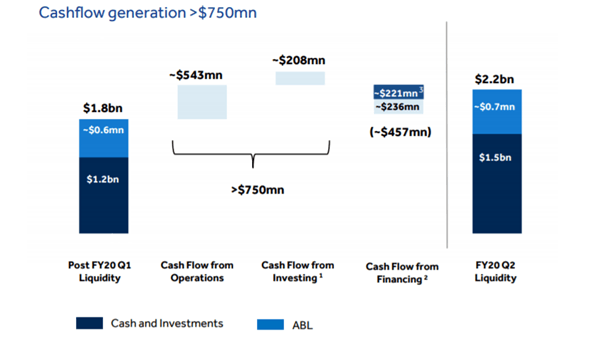 There’s still plenty more cash flow to be unlocked – BBBY plans to drive an additional $250-350 million in EBITDA, partly through >200 store closures over the next two years (mostly Bed Bath & Beyond branded). Given many of these stores currently operate at a negative EBITDA, expect significant margin expansion post closure.

Plus, BBBY’s plan to transform its real estate footprint into a digital-first operating model, leveraging stores for ship-to-home fulfillment, should also drive savings and unlock additional cash flow. Details on its real estate optimization plans are fuzzy right now, but more details are set to be unveiled at the Investor Day this month.

Swap the Equity for the Credit

While 2Q was strong, I am hesitant to underwrite the sustainability of current trends. Clearly, the environment is helping with many of BBBY’s key categories, but once the demand tailwinds fade, there remain plenty of risks around the transformation effort, with store traffic still a major issue (case in point – store comps were down 12% in 2Q). Given the risks, BBBY equity strikes me as fairly valued.

But I do like the credit – the company is now net cash and has ample liquidity to work through the pandemic. I also see ample room for additional cash flow to be unlocked as the company realizes savings and optimizes the asset base. Assuming no capital allocation hiccups (e.g., debt-fueled buybacks), BBBY looks poised for a rating upgrade, which makes the credit a compelling buy at current yields (~6-7% on the ‘34s/’44s).

Disclosure: I/we have no positions in any stocks mentioned, and no plans to initiate any positions within the next 72 hours. I wrote this article myself, and it expresses my own opinions. I am not receiving compensation for it (other than from Seeking Alpha). I have no business relationship with any company whose stock is mentioned in this article.