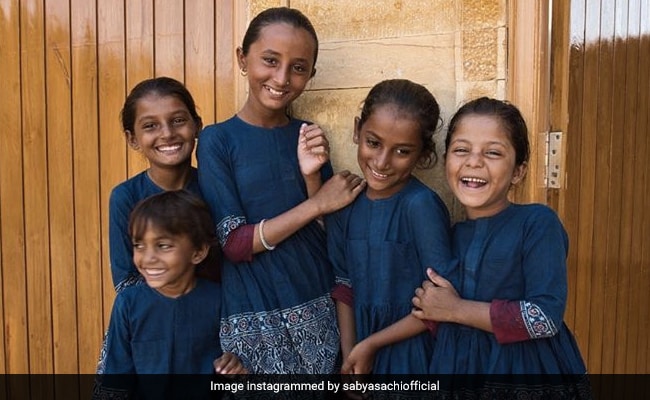 Designer Sabyasachi Mukherjee, a popular name in the Indian fashion circuit, who has designed wedding outfits for the likes of Priyanka Chopra, Deepika Padukone and Anushka Sharma, recently added his midas touch to (wait for it) school uniforms . Yes, you read that right. On the morning to Wednesday, the ace designer shared pictures of his latest project, which can be best described as fashion for a cause. The girls happily posing in the school uniforms designed by Sabyasachi, happen to be students at Jaisalmer’s Rajkumari Ratnavati Girl’s School. The designer recently collaborated with a USA based non-profit organisation called CITTA and designed uniforms using Ajrakh, a block-printing technique popularly used in the region (more on that later).

Take a look at the uniforms designed by Sabyasachi:

The 46-year-old designer, in a separate post, explained what went on into the making of the uniforms. He wrote the idea behind designing the uniforms was to embrace the local techniques, thereby making the students wearing them, feel at home. “When designing these outfits, I wanted to make sure they reflected the region’s craft heritage, with the hopes that it would highlight for the young girls the beauty and power inherent to the craft, as well as provide a better sense of community, connection and pride for their home,” read an excerpt from his statement.

Speaking of the techniques used, Sabyasachi added, “With this in mind, we chose to use Ajrakh – a traditional textile from the region. It’s block printed with natural dyes using a technique that predates modern history.”

The project, initiated by CITTA aims to provide young girls in Jaisalmer with education, and teach them vocational skills, expanding the opportunities for economic independence for them.

Many Bollywood stars including Vidya Balan, Priyanka Chopra, Deepika Padukone, among others swear by Sabyasachi’s outfits. The designer, who has also been the official wedding couturier for many Bollywood’s A-listers, is known for using Indian handicrafts, homegrown techniques in his designs.