Despite the COVID-19 pandemic, Tennesseans turned out to polling sites to cast their votes in person — while staying 6 feet apart — on Aug. 6, 2020.

On a sunny September day, Jenn Foley climbed the stairs to place her palm card in the front door of a downtown Franklin home.

Donning a face mask, Foley wove her way through the neighborhood, leaving her information for her Democratic campaign at doors rather than knocking and talking to potential voters.

This is Foley’s latest way of campaigning for District 65 in the Tennessee House of Representatives in the midst of the coronavirus pandemic. Her district spans from Fairview to downtown Franklin, heading south to include much of Spring Hill. Earlier in the day, she met with other local Democratic campaigns in the Whole Foods parking lot to connect with volunteers and share her materials to drop at homes.

“It’s very weird to campaign this way,” she said. “I’ve only performed my stump speech once in person. Otherwise, I have been talking to my camera inside my home, talking to voters about what they expect and hope from their legislators.”

She will face Rep. Sam Whitson, who is trying for a third cycle. Whitson originally ran for the seat in 2016, when he defeated later-expelled member Jeremy Durham in the primary. He’s held office since he won the election that November.

Foley grew up in Massachusetts and moved to the Nashville area in 2002. From there, the now Spring Hill resident earned her doctorate in anthropology and later worked for the Tennessee Language Center in translation and language services. 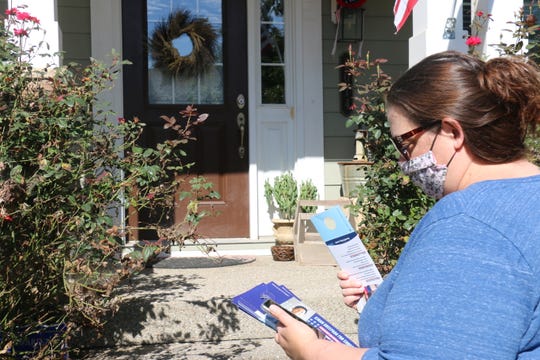 Jenn Foley makes sure she has the right address before placing her palm cards at a Franklin, Tennessee, door on Sept. 5, 2020. (Photo: Emily West / The Tennessean)

Two years ago, Foley said she felt the call to dig into politics, and for her that meant a run for office. If elected, Foley said she wants to focus on education, Medicaid funding and dollars given to rural communities.

She said, primarily, voters have spoken up about the internet in her district, particularly those who still don’t have access to broadband.

“The pandemic has really highlighted this as an issue,” she said. “It’s not just for schools, but it’s also about internet for small businesses and keeping them afloat. There is a gap in some places in Williamson County and not a lot of choice.” 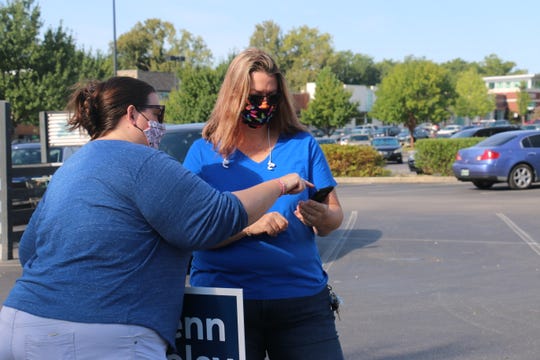 She said the pandemic had also shown how much funding was truly needed for public schools. Already, according to calculations, Williamson County Schools is below its enrollment projections by 2,200 students, which will affect the money it will get from the state’s Basic Education Program formula. Foley has children of her own that attend in the district.

“I don’t think everyone is aware of just how much schools cost, particularly this year,” she said. “So many have a concern for public education.”

Bringing her Democratic message in a red county is a bit daunting, she said. But she hoped that voters paid more attention to issues rather than party affiliation. On her walk down the sidewalk, she tried to hand a palm card to a family working in their yard. She watched them gently hand it back once she said which party she was running for this election.

“It almost felt like I was outing myself as a Democrat when I decided to run,” she said, standing in the shade taking a break. “There’s been a total demonization of the word ‘Democrat,’ and that comes not only from online but elected officials as well. Democrat or Republican, we are your neighbor. Just as a Democrat, we have different ideas to solve the problems we see our state facing.”

Want to read more stories like this? A subscription to one of our Tennessee publications gets you unlimited access to all the latest news and the ability to tap into stories, photos and videos from throughout the USA TODAY Network’s 261 daily sites.

Emily West is a reporter for The Tennessean, covering Franklin and Williamson County. You can reach her on Twitter @emwest22 or email her at [email protected]